This directive issued on [REDACTED] 2301, by order of Rear Admiral Vincent T. Jansson

The Anomaly Recovery Unit (ARU) is a Top Secret Starfleet division, tasked with the recovery, containment and study of those entities classified as 'space anomalies', with the purpose of protecting other Federation vessels and also nearby civilian populations from the anomalies powers or effects.

Ongoing exploration missions by Federation flagships not only increased the Federation's borders and area of influence, but also made their existence known to a multitude of species, not all of whom have been hospitable. Indeed, as the number and frequency of attacks on Federation vessels, by previously unknown or unmanaged anomalies, increased, it became necessary to withold this information from UFP members at large in an effort to protect current and future exploration events. However, without sufficient means to capture, or even study, these anomalies, it was only possible to establish localised quarantine zones in the hope that other passing ships would avoid the area.

This tactic proved to be ineffective.

Thus, the Anomaly Recovery Unit was created and funded from a black budget, reappropriated from various legitimate Federation workstreams. Currently there are a total of seventeen starships, of various class and size, commanded by ARU personnel. The names and registries of these vessels is classified at level ARU-GAMMA-05 on a strictly need-to-know basis. Cross-ship communications are forbidden as per the terms of ARU-directive [REDACTED] and all reporting is made via ARU central command, headquartered on Starbase 237, in the [REDACTED] area of Federation space. 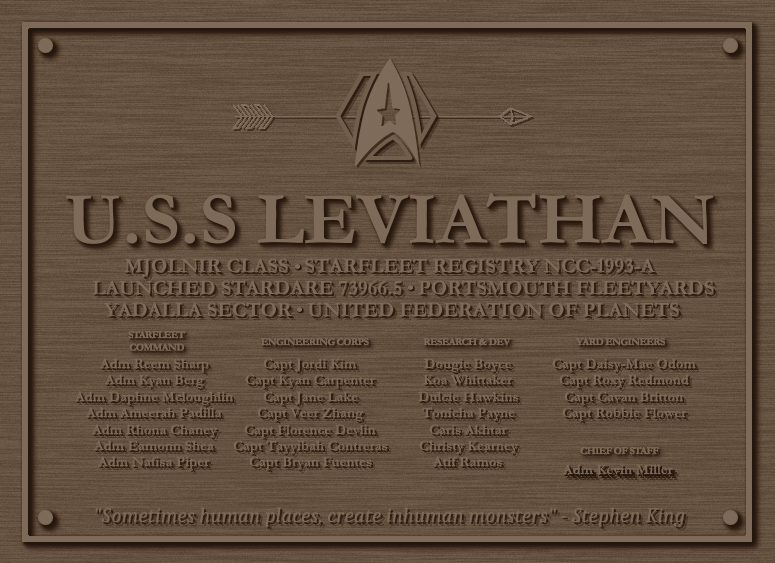 "We live on a placid island of ignorance in the midst of black seas of the infinity, and it was not meant that we should voyage far.” - H. P. Lovecraft

Welcome to the USS Leviathan! This top-secret vessel traverses the four quadrants in search of the weird, the strange, and the unknown.

If that sounds like your kind of thing then we are always on the lookout for new writers to join our hugely talented team, so contact me or XO Sage and we can talk about bringing you on board.

Welcome to the Levi! We're thrilled to have you aboard this exciting original concept in STF! I'm looking forward to writing with you all and seeing as your characters develop and the Lore that is 'The Leviathan' expands! You are amongst some of the finest writers this fleet has to offer and you are one of them!

“Success is not final. Failure is never fatal: it is the courage to continue that counts” - Winston Churchill

“All right, sweethearts, what are you waiting for? Breakfast in bed? Another glorious day in the Corps!" - Sergeant Al Apone

We are only days out from our rendezvous with the USS Celeste and we need the RTF ready for whatever we might find. If containment remains intact then it will be a simple transfer of anomaly DA8012059. But if it's been breached, then don't be fooled by this rage muffin's adorable appearance. You need to be prepared for the fight of your lives!

“As our circle of knowledge expands, so does the circumference of darkness surrounding it.” - Albert Einstein

Whatever is waiting for us at Kessik and onboard the USS Celeste, we need every crewmember in absolute peak condition, mentally and physically. So call as many evaluations as you require, subject us all to a mountain of tests, whatever you need to do to clear us all for this fight.

Find out everything that you can about DA8012059. We already know it won't be a teddy bear, but when charging into the unknown, forewarned is most definitely forearmed!

So many questions still remain on the fate of the USS Celeste. Did the containment for DA8012059 fail? Did the creature find a weakness in its cell? It will be up to you to improve on a possibly flawed design. Once this thing comes onboard the Leviathan, we can't risk it escaping again!